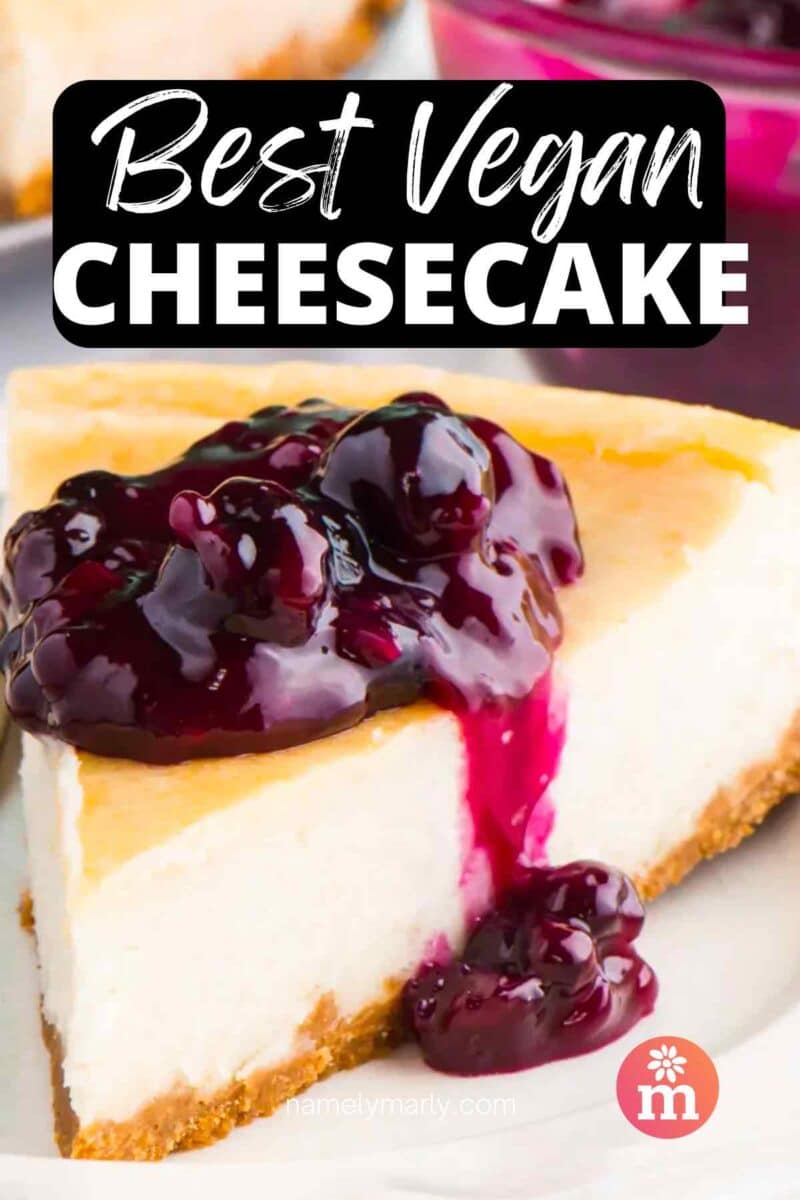 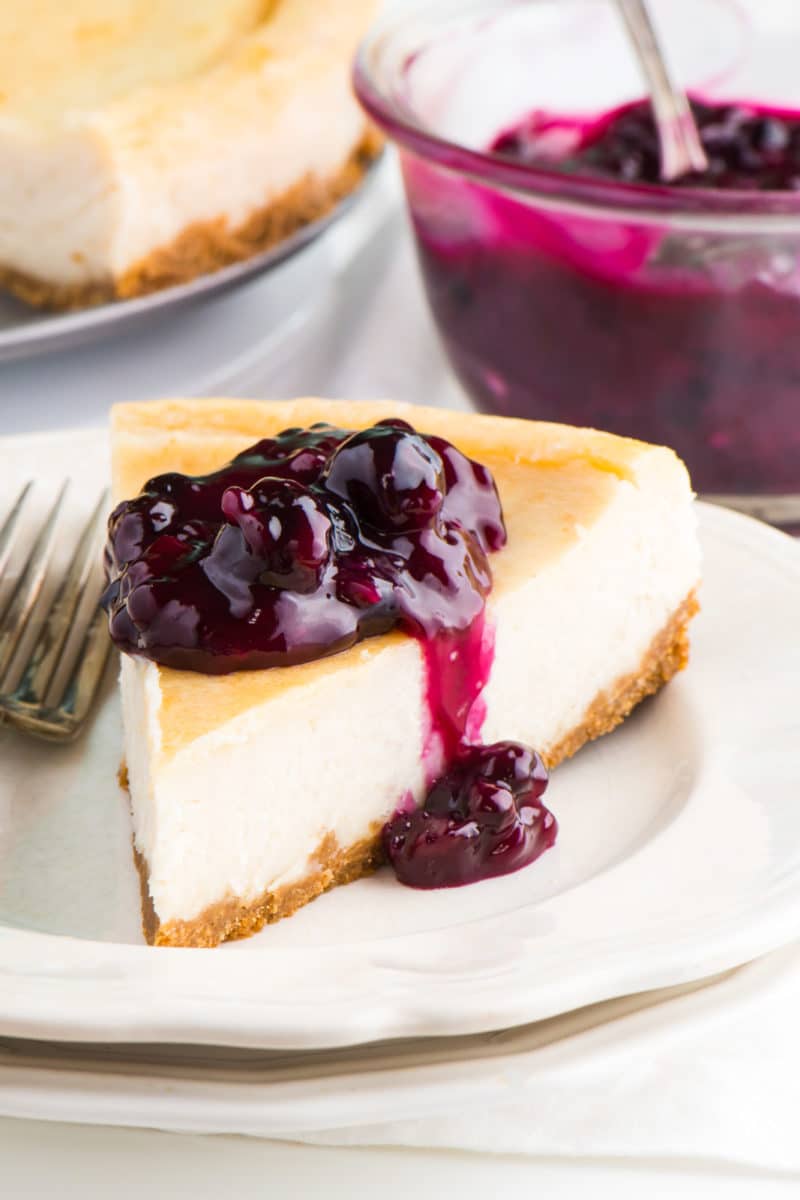 This Vegan New York Cheesecake recipe is a creamy, classic cheesecake recipe featuring a blueberry topping. Imagine a vegan cheesecake that’s rich and dense, and full of flavor. This cheesecake is prepared with a buttery graham cracker crust and a delightfully creamy cheesecake filling.

Every slice of this vegan New York cheesecake is drizzled with blueberry sauce. Isn’t it just heaven on a plate!

I used to love cheesecake in my pre-vegan days, but I don’t miss it today. Not at all! Are you worried that means I’ve given up that delicious dessert?

No worries! I just make my own, including this copycat Cheesecake Factory vegan cheesecake recipe.

How to Make Vegan Cheesecake

This is a baked vegan cheesecake as compared to my Raw Vegan Cheesecake recipe, which is frozen. Either one is relatively easy to make. This one begins with the crust.

Use the recipe to make the vegan graham cracker crust. Then press the crust into the bottom of a springform pan (or a pie pan if you don’t have a springform pan). Set this aside while you proceed with the filling.

Note: Use gluten-free graham crackers or cookies for the crust to make a gluten-free vegan cheesecake.

The next step is to make the cheesecake filling. Use these steps:

To make a gluten-free vegan cheesecake, do not add the flour to the filling. You can substitute a tablespoon of additional cornstarch or add 1 tablespoon of agar flakes.

You can top your vegan cheesecake with blueberry sauce, or make a strawberry purée to drizzle over the top.

I bake my vegan cheesecake in a water bath to prevent cracks in the filling. The water creates steam, therefore making the oven environment moister. It’s a super easy trick — watch our video to see how I do it.

If you feel intimidated by the idea of a water bath for your vegan cheesecake, you’re in good company. It concerned me the first time too. I love researching recipes and I found these great resources on making sure your cheesecake water bath doesn’t leak!

★★★★★
Made it a second time now for a birthday and the feedback was astonishing, to say the least… REALLY Fantastic recipe and so easy to do!

★★★★★
I made this for friendsgiving and it was perfect. Thank you for this amazing recipe!!!

What is a vegan cheesecake recipe made of?

Vegan cheesecake is usually made with vegan cream cheese, and other ingredients such as tofu, full-fat coconut milk, cashews, a vegan graham cracker crust, and other tasty ingredients.

Can I use a chocolate topping on cheesecake?

If you’d rather have a chocolate topping to your vegan cheesecake, I recommend a simple chocolate ganache. Combine 1 cup dairy-free chocolate chips with a half cup of vegan cream, like a rich creamer. Melt the chocolate together with the cream and then stir until it’s all combined.

A New York Cheesecake is an ultra-creamy, tall cheesecake. That’s why this recipe represents everything that’s so exciting about a vegan diet. It’s indulgent, delicious, and so satisfying!

We use tofu in this vegan cheesecake, which adds texture and creaminess. Some vegan cheesecakes call for a lot of cashews. I use cashews too, just not too many. I think this combination of ingredients creates the best Vegan New York Cheesecake that’s creamy and delicious. 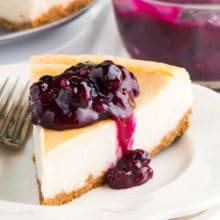 For the Vegan Cheesecake Filling:

For the Blueberry Topping:

* Use a can of coconut milk that has at least 12 grams of fat. That’s how you can tell it is full fat. I used Coconut Cream from Trader Joe’s because it’s rich and mostly cream. It helps if you refrigerate the can before making this recipe because the fat will solidify and you can easily drain the liquid.  If there’s a lot of liquid, you will want to drain the liquid, and use that liquid in a smoothie or some other recipe. **Sometimes I soak cashews, but I found for this recipe it wasn’t necessary. I put them in the food processor and pulse with the other ingredients. We don’t have a fancy, hardcore food processor either. It does result in a “gritty” batter, but it bakes up just fine. You can substitute Strawbery Puree for the topping instead of the blueberry sauce.
Calories: 266kcal | Carbohydrates: 38g | Protein: 2g | Fat: 12g | Saturated Fat: 8g | Sodium: 70mg | Potassium: 135mg | Fiber: 1g | Sugar: 26g | Vitamin A: 5IU | Vitamin C: 1.9mg | Calcium: 14mg | Iron: 1.3mg

This post was originally published in 2018 and was updated to include new photos, new text, and an updated recipe in 2020.