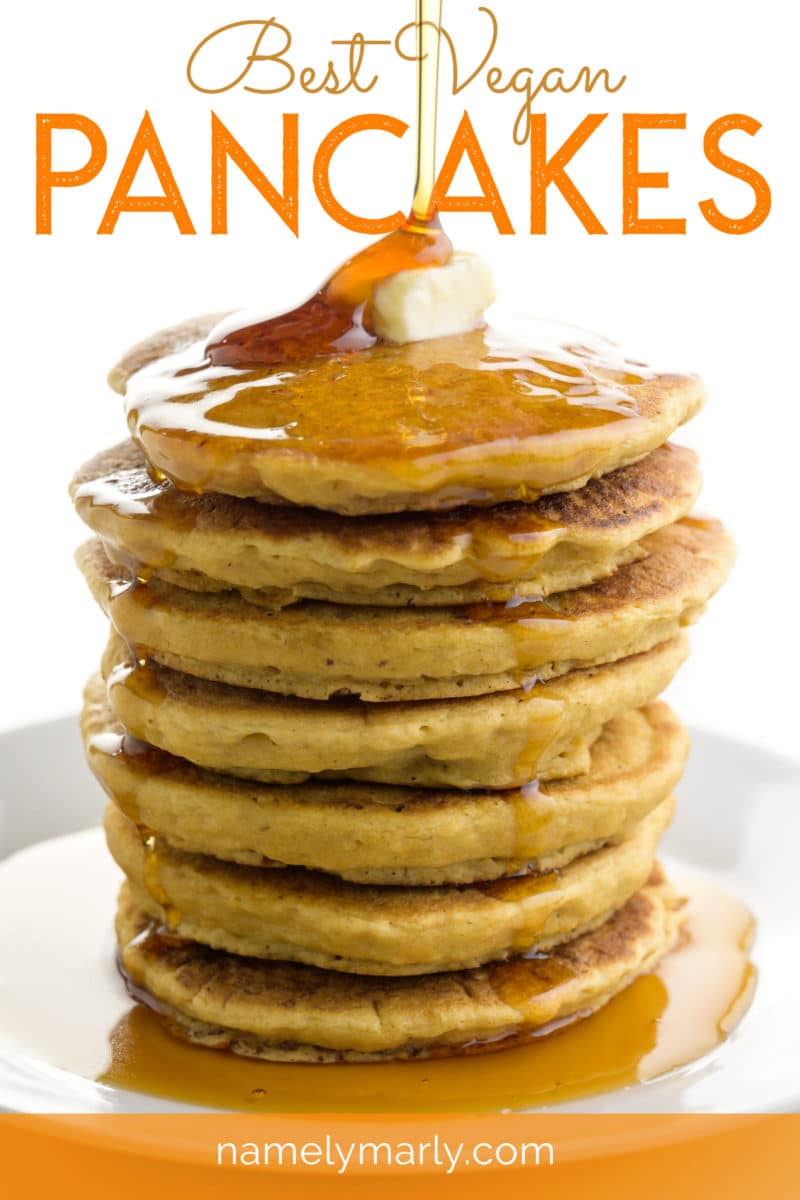 This vegan Pancakes recipe creates the best light and fluffy pancakes. You’ll love this vegan breakfast recipe served with maple syrup, peanut butter, and more. Make a double batch of these tasty pancakes and freeze them for easy toaster pancakes, too.

Sometimes there’s nothing better to soothe a tattered soul than easy Vegan Pancakes recipe. In the spirit of tradition, they can be eaten for breakfast, but why stop there? They make a great after-dinner sweet treat, but even the “light” variety of pancakes can leave you feeling a bit heavy. So you know what? Forgo the dinner and go straight to the pancakes as your evening meal. Breakfast for dinner, that’s what I say!

It’s not as if I’m the first person to invent pancakes for dinner. But still the idea of it sounds so thrilling. Don’t you think?

It was a recent reader who pointed out that I hadn’t yet posted a pancake recipe. No pancakes? That had to be resolved…and quickly.

Besides, if the weather isn’t exactly perfect. I can’t think of anything that works better than pancakes to lift the bad weather blues. Well, except for hugs from your kids, and lovin’ from your honey. But you know what I mean!

I’ve loved making simple vegan pancakes from scratch for quite a while now. But when I first started, I wasn’t even certain I could make pancakes vegan. It was fun figuring it out and now sharing it with you.

Typical pancakes are not vegan because they’re made with milk and butter from a cow. However, you can make some easy ingredient adaptations to make your pancakes recipe vegan! For example, pancakes with almond milk are easy to make because almond milk is so widely available.

What Pancake Mix is Vegan?

How to Make Vegan Pancakes from Scratch

As you can see above, there are vegan pancake mixes you can buy, but nothing beats homemade pancakes! This recipe for vegan pancakes is not only delicious, but it’s also easy, too.

Note: There are two ways to prepare your pancakes, based on your preferences. If you like thick, fluffy pancakes, just follow the recipe as is. However, if you want thinner, spongier pancakes, then add ¼ water to the batter.

In a medium-size bowl, combine the dry ingredients and give them a stir.

To make the vegan pancake batter, create a well in the middle of the flour mixture. Pour the almond milk, into the flour. So, yes, this is a pancake recipe with almond milk.

However, it’s easy to make a pancake recipe vegan by using any of your favorite plant-based milks (such as oat milk, cashew milk, soy milk, etc.). Of course, I must say, These almond milk pancakes are so delicious!

Pour melted butter in with the plant-based milk. Add vanilla and stir until combined.

The goal is to not over-mix, otherwise you’ll overwork the gluten causing tough pancakes. So, mix until just combined, allowing some small lumps is fine.

Place a skillet on your stove and raise the heat to medium or medium-high. Add a bit of coconut oil and spread it around the pan.

When the skillet is hot enough, pour about 1/4 cup of pancake batter in a circle. You can use the bottom of the measuring cup to even out your circular pancakes…if your’e into that kind of thing. I’m usually able to get 3 pancakes per skillet, but you can also use an electric griddle to make more at a time.

Let the pancakes cook until you see bubbles forming on the top-side batter. That is a sign that your pancakes are ready to be flipped. Turn them over carefully and cook the other side for another minute or two until they’re done all the way through.

Place finished pancakes on a baking sheet and keep that in a slightly warmed oven while you finish the rest of the pancakes.

To serve the perfect vegan pancakes, top with vegan butter, maple syrup and Blueberry Sauce. I love using the blueberry sauce recipe from my Vegan Cheesecake.

Want to make your healthy vegan pancakes fluffy? I did lots of research on the tricks to fluffy pancakes. I thought these tips for perfect pancakes by Rick Martinez were great.

However, there was something missing for making vegan fluffy pancakes. I never saw it spelled out like I wanted. And to be honest, there’s not that much difference between homemade vegan pancakes and regular pancakes…except for eggs.

And yet, my vegan pancakes weren’t turning out like I wanted them to. But after locking myself in the kitchen with some flour and a skillet, now I’ve become the pancake whisperer! 🤗

So, let’s break down the ways you can create the perfect fluffy pancakes:

Serve these vegan pancakes with some tasty blueberry sauce for a special treat.

If you love vegan breakfast recipes, you’ll definitely want to check these out: 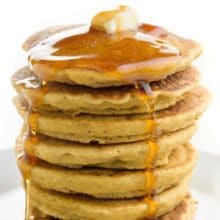