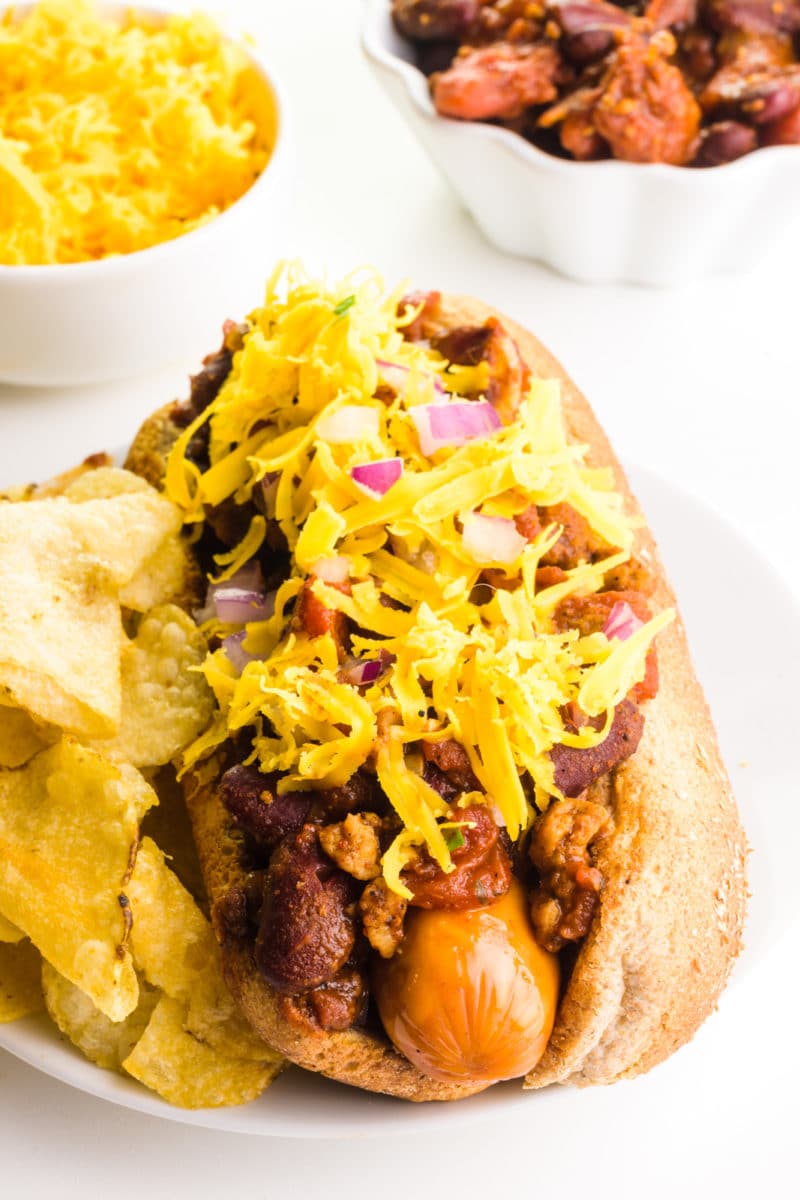 This tasty Vegan Chili Dog recipe features a vegan hot dog in a bun smothered with veggie chili, vegan cheese, and onions! This American classic recipe is made vegan while still keeping it easy to make, delicious, and filling, too. It’s like the vegan corn dog, super indulgent, delicious, and party-worthy!

We sat at the Dreamy Weenie restaurant on the outskirts of the French Quarter anxiously awaiting our meal to arrive. It’s not every day we get to order a Vegan Hotdog with Veggie Black Bean Cajun Chili, Vegan Cheese, and a Sweet Pepper Relish.

I couldn’t wait to get back from New Orleans to recreate my own vegan chili dog recipe. And that’s exactly what I did.

What are Vegan Chili Dogs?

You make a vegan chili dog by stuffing hot dog buns with your favorite vegan hot dogs. Top these with vegan chili, vegan cheddar shreds, and any of your favorite toppings, such as chopped onions.

Since hotdogs are something you typically eat at the ballpark, then let’s just say this one is a grand slam. And, now you can even find vegan hot dogs at Costco! You may already know, but I love shopping vegan at Costco!

A chili dog smothered in homemade bean chili, cheese, and onions is a perfect weeknight dinner. Add some favorite toppings to make every hot dog chili-infused bite even better!

In a hurry? You can buy a can of vegetable chili and skip the quick, homemade chili in this recipe.

How to Make Vegan Chili Dogs

It’s easy to make vegan chili dogs! Here’s a synopsis of the steps:

Here’s a visual guide to the instructions.

Begin by placing some vegetable oil in a skillet over medium heat. Once the oil is heated, place the hotdogs in the skillet and cook until the sides are browned. Use tongs to turn the hot dogs to cook them evenly.

Place the cooked hot dogs in an oven on low to stay warm.

Place the oil and chopped onions in a saucepan over medium heat. Cook the onions until they are tender and translucent.

Stir in the remaining vegan chili ingredients. Cook the chili over medium heat until it begins to simmer. Give it another stir and then allow it to cook until some of the liquid has cooked out and you’re left with a nice, thick chili. See? It’s so fast!

If you’re in a hurry, use my easy vegan chili recipe!

While the skillet is still hot, drizzle it with some more olive oil and place hotdog buns (or brat buns) face down. Rub the buns in the oil and cook each one for a few minutes until toasted, and then set them aside.

Place a cooked hotdog in each toasted bun. Top each hot dog with vegan chili and vegan cheese. Place the hotdogs back in the skillet and leave them there for about 5 minutes to allow the steam to melt the cheese.

If you’re in a hurry (like I usually am), microwave them for a minute or so.

We were poor when I was a kid. And that means we ate a lot of hotdogs, the unhealthy, super-cheap kind.

I ate hotdogs boiled or sliced down the middle and fried. I even ate them cold; the slimy surface leaving behind a coating in my mouth.

Now as an adult I think about what I ate as a child. Now we know what ingredients were in those cheap hotdogs, and I cringe.

Today I eat hotdogs made from soy. My hubby and I joke about what parts of the tofu bean is used to create these veggie hotdogs. Could it be soy lips? Soy intestines? Who knows!

Add this optional bell pepper aioli, by combining these ingredients in a food processor:

Pulse until smooth. It will thicken after a few minutes.

Alternatively, you can add a teaspoon or two of sriracha to 1/4 cup vegan mayo.

Sure, you love this vegan chili dog recipe, but it leaves you wanting more. Be sure to check these out: 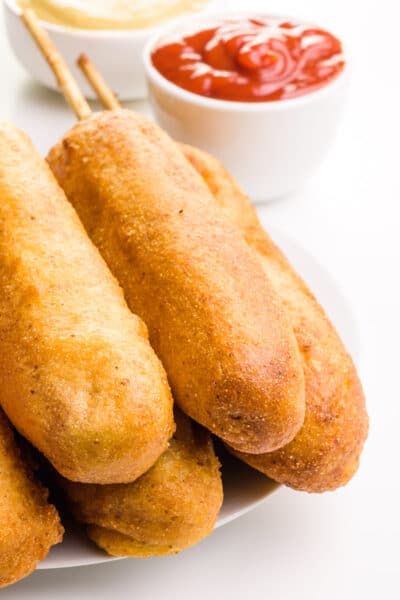 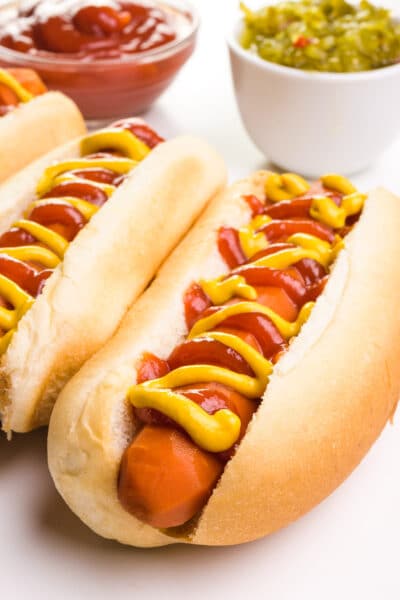 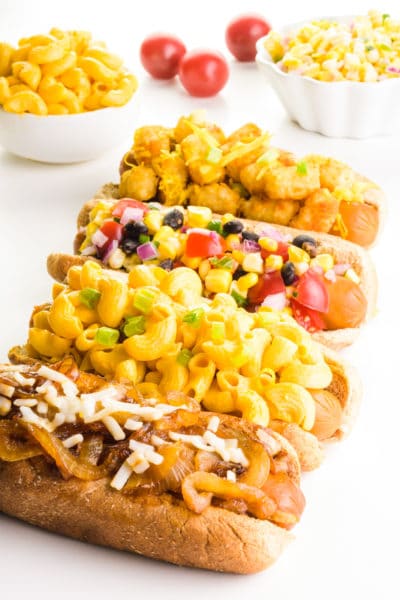 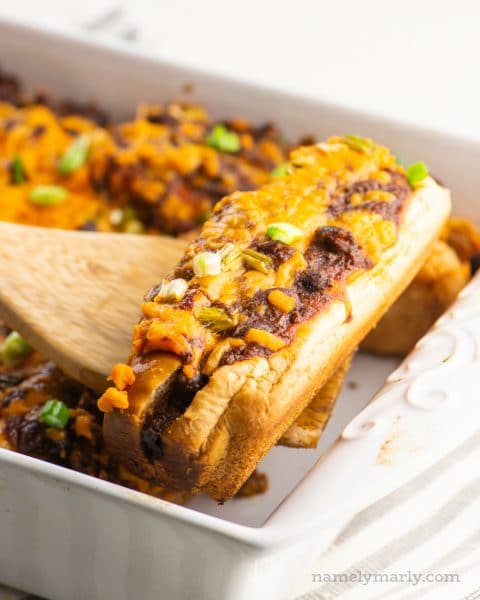 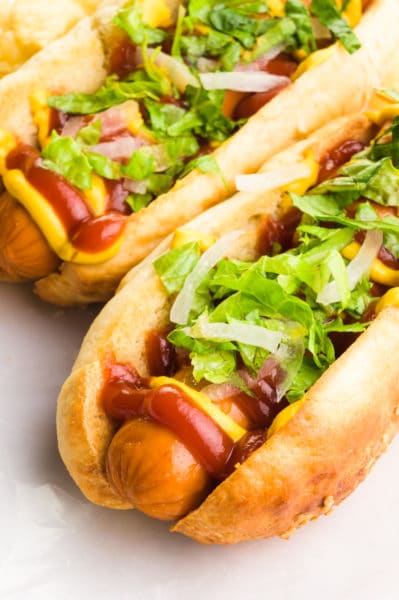 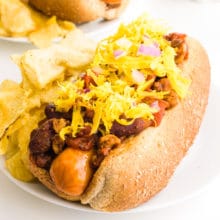 For the Vegan Chili

For the Vegan Chili Dogs

This post was originally published on June 14, 2013, and was updated to include new photos, new text, and an updated recipe in 2020.