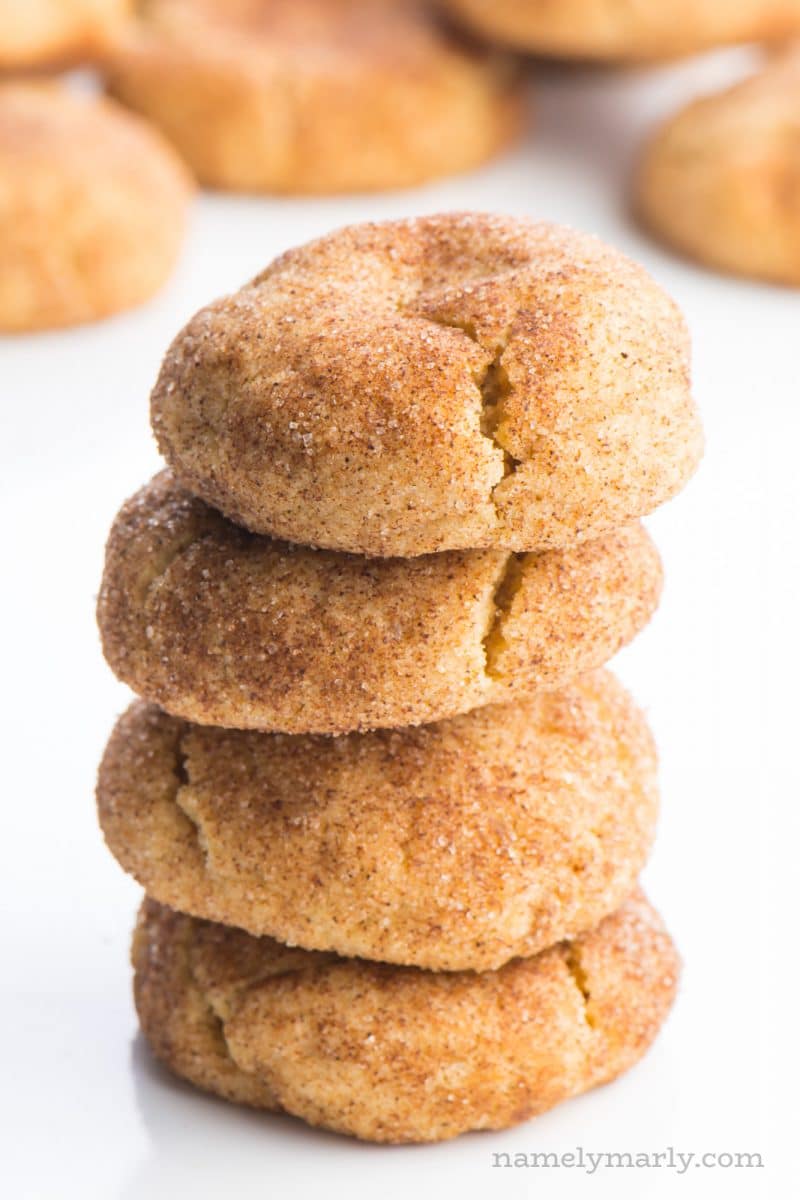 This soft and chewy Vegan Snickerdoodles recipe makes amazing cinnamon sugar-spiced cookies. Vegan or not, this is the best snickerdoodle recipe and makes tender, buttery, and puffy cookies rolled in sugar and cinnamon. You’ll love the easy-to-follow instructions too — ready in around 30 minutes from start to finish.

For a fun change of pace, try these chocolate-dipped snickerdoodles.

I was in high school when I tried my first snickerdoodle cookie. A friend’s mother made them, and I thought they were divine. If I was alone with that tray of delicious cookies, I might have eaten them all. I had very little self-control around sweets in those days.

Today, I love making vegan snickerdoodles because they’re a treat everyone loves.

What Cinnamon is Best for Snickerdoodles

There are two different categories of cinnamon: Cassia and Ceylon. Cassia cinnamon is a ground reddish powder with a bold, intense flavor. It’s most often used in baking. Most cinnamon, unless otherwise noted, is Cassia. Ceylon cinnamon has a more delicate flavor and is more expensive as a result of its rarity. You might use it for things like puddings or sauces. For the purpose of these cookies, I recommend using standard ground cinnamon (Cassia) because we’ll want the bold flavor it offers.

Interestingly enough, the cookie part of snickerdoodles is more like a puffy sugar cookie. However, rolling them in the cinnamon-sugar mixture makes all the difference. I think you’ll be pleased that vegan snickerdoodles are so easy to make — you can make them in around 30 minutes.

Step One: Cream Butter and Sugar

We begin this recipe for vegan snickerdoodles by mixing the vegan butter with granulated sugar.

You can use either a hand-held mixer or a stand mixer. Beat the butter and sugar on medium speed until nice and fluffy. This creates a light base for the cookie dough.

Next, we’ll add some of the wet ingredients, like applesauce, milk, apple cider vinegar, and vanilla. Beat this all together on medium speed until combined.

Next, whisk together the dry ingredients in a separate bowl, including the flour, baking soda, cream of tartar, and salt.

Make the batter by adding the flour to the butter mixture and either mix together with the mixer or stir it with a spatula or spoon.

Place the pan in the oven and bake the cookies for 8–10 minutes. I recommend removing them from the oven around the 8-minute mark. Because of residual baking, the cookies will continue to bake on the pan as they cool. Leave them on the pan for 1–2 minutes, and then transfer to a wire rack to cool completely.

What is A Snickerdoodle?

A snickerdoodle is a soft cookie rolled in cinnamon sugar. What makes this simple, puffy cookie worthy of such a silly name? They’ve also been lovingly referred to as kinkawoodles and tangle breeches. The recipe itself has been dated as far back as 1889. New England cooks were known for giving odd names to their dishes and so there is speculation that the snickerdoodle comes from this whimsical style of naming. One recipe from 1901 says that “Snickerdoodles is the somewhat fantastic name of quickly-made little cakes especially dear to the children’s heart.”

What is the difference between a sugar cookie and a snickerdoodle?

You have lots of options for egg replacers when making vegan snickerdoodles. These include:

Eggs can play many roles in baked goods; providing texture, richness, leavening, and binding. The key is knowing what role the eggs play in your recipe.

I chose unsweetened applesauce for these vegan snickerdoodles. It may seem like an unusual egg replacer for a cookie, but it works really well.

According to my taste testers, the end result was really yummy. I hope you enjoy these soft and easy, healthy vegan snickerdoodles!

★★★★★
This is my favorite snickerdoodles cookies. Make them for my family all the time!

If you love these vegan snickerdoodles, be sure to try these tasty vegan cinnamon cookies too: 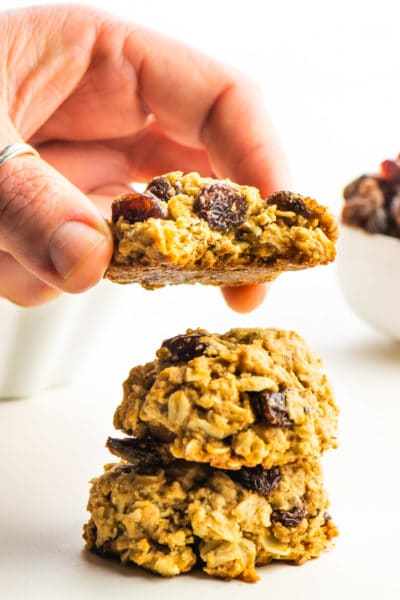 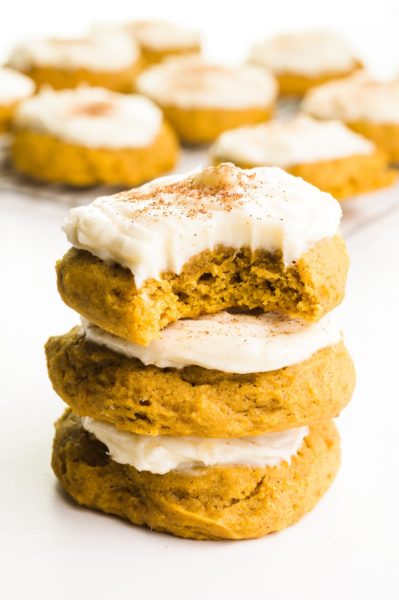 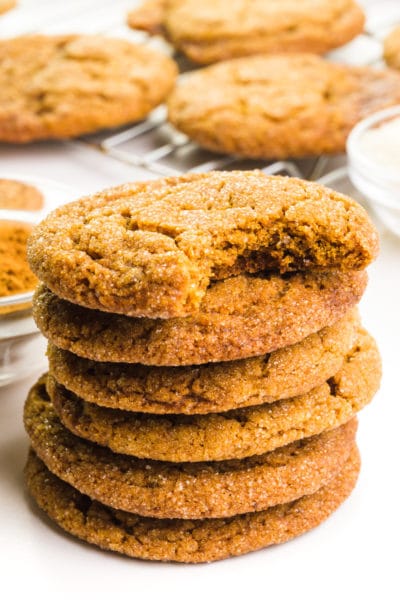 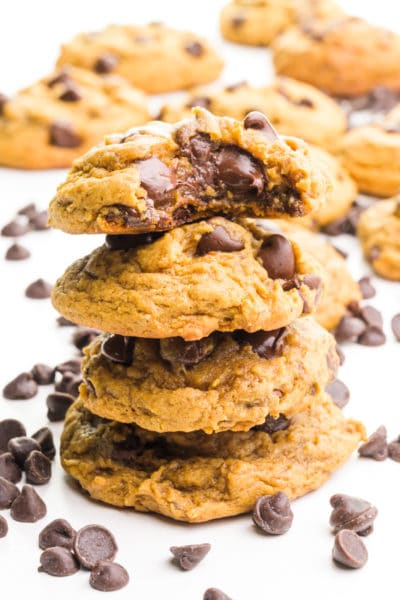 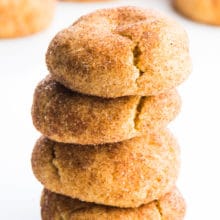 Baking Time: It’s tempting to leave these cookies in the oven a little longer, but they firm up as they cool. Butter: If you want, you can substitute 1 cup of vegan butter with 1/2 cup vegan butter + 1/2 cup peanut butter (I’ve done this and the PB taste does not overshadow the cookie) or you can use 1/2 cup vegan butter + 1/2 cup refined coconut oil. Measure: If you want equally-sized cookies, measure the entire ball of dough and then divide by 36 to determine the size of each cookie dough ball. For me, the entire ball of dough weighed 32.25 ounces, so divided by 36, my individual cookie dough balls weighted .90 each.  Sugar: I used organic sugar, but coconut sugar would work well in this recipe too. If you don’t have either, granulated sugar works fine. Resting the Dough: I recommend chilling the dough in the fridge for 30 minutes. However, if you’re in a hurry, cut the dough ball in half and wrap both in plastic wrap. Place both dough balls in the freezer. Wait ten minutes, remove one of the dough balls, and begin rolling into individual cookie dough balls. Bake those and then remove the second dough ball and begin rolling it into individual dough balls.
Calories: 94kcal | Carbohydrates: 12g | Fat: 5g | Saturated Fat: 3g | Sodium: 67mg | Potassium: 42mg | Sugar: 9g | Vitamin A: 120IU | Calcium: 4mg | Iron: 0.1mg

This post was originally published in 2009 and was updated to include new photos, new text, and an updated recipe in 2020.