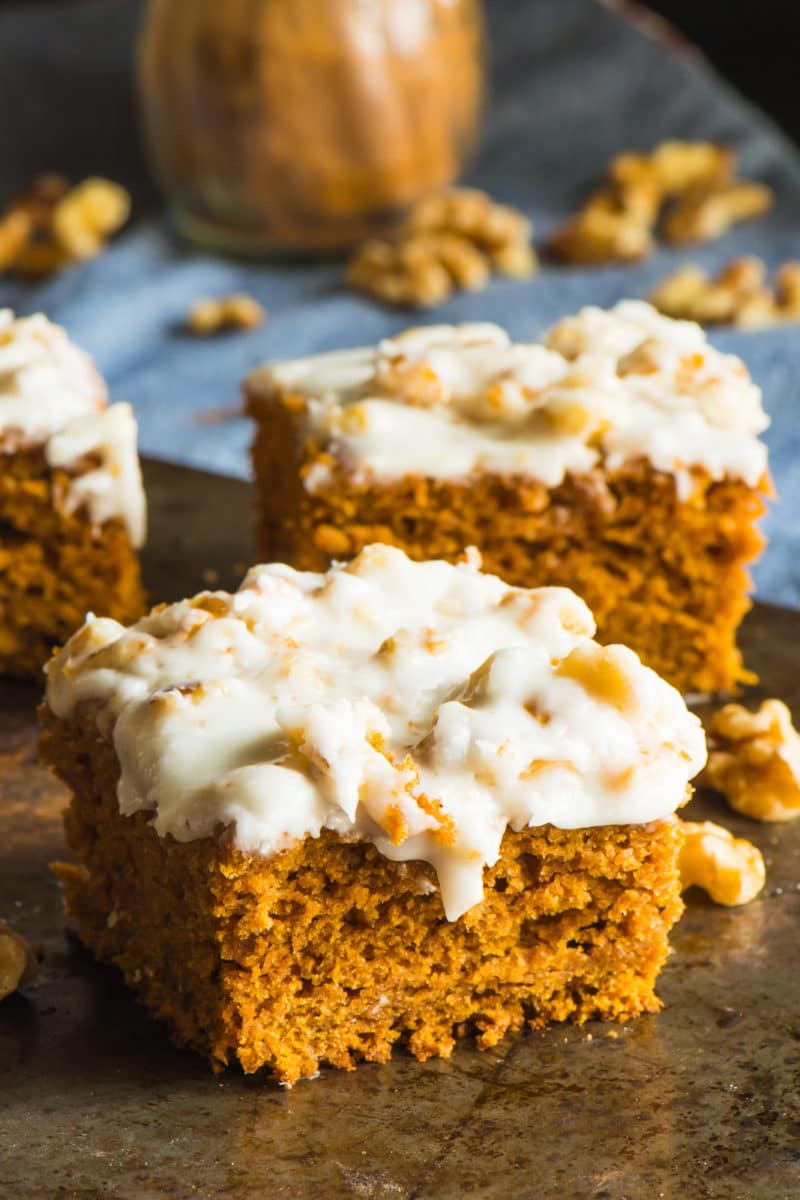 These Vegan Pumpkin Blondies are comfort food at their very finest. Pumpkin, brown sugar, cinnamon, and pecans all combine to make the perfect blend of flavors that leave you wanting bite after bite. And my theory is, if you’re going to indulge in comfort food there’s nothing better than vegan comfort food!

Don’t you just hate it when you walk in the store in August and they’re already hawkin’ the Halloween candy? The heat is still melting the make-up off my face, how can I manage to think about bite-size pieces of chocolate to hand to the neighbor kids dressed like Jack Sparrow?

Well, it appears I might be wreaking some Halloween havoc of my own with today’s post. So let me begin with an apology. I didn’t mean to do it. The thing is, I set out to make some blondies using an unusual ingredient. I’m trying to add to my list of 100 Things to do with Chickpeas and I thought chickpeas in Blondies might just work.

The problem? No chickpeas in the pantry. But by this point, I already had might sites set on the Blondies. Panic mode set in.

I scoured the pantries for a replacement. Black beans? I’ve seen those in brownies, but I don’t think they would do so well in Blondies. They’re supposed to be sort of…blonde. (Thus, the name). That’s when I eyed the can of pumpkin. “No!” I thought to myself. “That’s like wearing white shoes in March…it’s TOO SOON!”

But then I realized my lack of fashion sense could come in handy. I decided to throw my immature sense of fashion, my limited knowledge of food faux pas, and my remaining bit of caution to the wind,  and give it a go. Pumpkin Blondies in August. Why not?

I not only used that can of pumpkin, but I also added a bit of frosting to the recipe. That’s because as vegans we don’t really have the option for something like white chocolate. It’s typically (or always) made with dairy.

Even though white chocolate would go so nicely with this recipe, I decided to the next best thing: I topped it with a Coconut Frosting…sans the white chocolate. It’s perfect!

You can adapt this recipe by trying the following:

However you bake them, these Vegan Pumpkin Blondies aim to please. 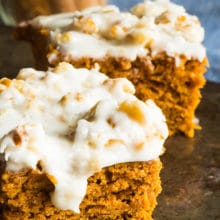 If you’re into Pumpkin desserts, check these out:

PS. This post was originally published a while ago. It was updated with new photos on 10.24.16. Here’s a sample of one of the old photos: