This easy Vegan Pie Crust Recipe creates a crispy, buttery pie crust perfect for your next vegan pie. You can master this easy flaky crust using only 7 ingredients. It begins with the perfect vegan pie dough, made with my favorite secret ingredient!

You’ll love filling this pie crust with a Vegan Chocolate Pie Filling topped with Vegan Meringue. It’s not only delicious, but it’s beautiful too!

One of the most important parts of any pie is having a perfect pie crust. That’s not rocket science. But the really tricky part is making a simple pie crust that results in a flaky crust, suitable for any pie filling.

This recipe walks you through step-by-step so you can make a delicious vegan pie crust from scratch!

This is my time-tested vegan pie crust recipe. In fact, I’ve been using (and refining) this recipe for years.

This vegan pie crust is made with only a few simple ingredients:

Use Cold Ingredients in Pie Crusts

Keeping your pie dough ingredients — like the fat and liquids — as cold as possible prevents the fat in the unbaked pie from getting soft. If the fat gets soft and melty in the dough before baking, you can say bye-bye to a flaky crust.

However, using chilled fat helps it stay intact in the dough. Then as the pie bakes, the lumps of fat melt in the oven and produce steam. That steam helps creates micro-layers of flakiness. I think this may have been what my sisters called me when I was a kid, but I digress.

How to Make Vegan Pie Crust

First things first, I like to use a food processor to make my pie crust. It makes it easier to get the vegan butter evenly distributed throughout the flour.

Here’s the dilemma: If you over-process your dough, it can overwork the gluten in the flour, resulting in a chewy crust. You also want big bits of butter throughout the crust, because that’s what makes it flaky. So, just be sure to use the processor in short bursts.

Combine the flour, salt and sugar in the food processor and give it a few pulses to combine.

Step Two: Cut in the Fat

Store both the vegan butter and vegetable shortening in the fridge (or even the freezer) for about 30 minutes prior to making your crust. Why? Because you want bits of fat distributed throughout the dough and working with cold fat helps achieve that.

Chop the cold vegan butter and shortening and then add these slices to the flour mixture. After a few pulses, the fat should be equally distributed throughout the dough.

When you add liquid to all-purpose flour it immediately begins activating the gluten. That’s one reason I’m using equal parts of water and vodka. I learned about this trick from 101 Cookbooks. Heidi recommends including a little vodka because it helps make the pie dough to be more malleable and flakier.

To chill the water and vodka, pour it in a glass with ice. Then measure it out and pour it over the crust.

Sprinkle the cold vodka over the pie dough and stir until combined. Next, add the chilled water, 1 tablespoon at a time until the dough is slightly tacky and sticks together.

This is a double pie crust recipe, so once your dough is ready, divide it in half and roll the dough into discs. Then wrap it in plastic wrap and chill in the fridge for 30 minutes or up to 3 days. Or you can freeze it where it will last up to 2 months!

I love having a disk of frozen pie dough in the freezer for those spur of the moment times when I want to make a pie.

That chilling step is important because it helps create a firm dough and makes rolling it much easier.

The next step is to follow your specific pie recipe instructions. For example, a vegan pumpkin pie will call for an unbaked vegan pie crust. In that case, you would roll out the dough, place it in the pie pan, and crimp the edges. Once the filling is ready, pour it in the unbaked pie shell and bake it all together.

Alternatively, a chocolate pudding pie usually calls for a baked pie crust. In that case, you would roll out the dough, place it in a pie pan, crimp the edges, prick the bottom of the pie with a fork, and bake the crust. I oftentimes will add pie weights to the crust while baking it so that the crust doesn’t develop bubbles as its baking.

Don’t have pie weights? Add a sheet of parchment paper over the unbaked crust and top that with some dried beans. I’ve done this and it works!

How to Roll Pie Crust

To roll out pie dough, begin by lightly flouring a surface or you can roll the dough between two sheets of waxed paper.

Either way, just remember to be gentle when rolling your dough. Using a rolling pin, always start from the center of the disc and roll out away from the center. This requires turning the dough frequently. So roll, and turn, then roll and turn. You get the idea.

For a standard 9″ inch pie pan, roll the dough 11–12″ in diameter. Yes, I keep a ruler in the kitchen. Or you can get a pie rolling sheet that gives dimensions.

Then transfer the dough into the pie pan and trim and flute the edges.

Basically, shortening is a fat that is firm at room temperature. Most shortenings, such as Cristco, are made from vegetable oil and are therefore vegan. However, read the label to make sure your shortening is made without animal products like lard. Shortening is often recommended for pie crusts because it helps make them crispy and flaky.

How Do You Make a Flaky Pie Crust?

Pie dough involves pockets of fat surrounded by hydrated flour. We’ll be using a food processor to cut the fat into the flour and then roll it out to make a pie crust. While that crust is baking, it gets flaky because of the layers of fat and hydrated flour throughout the dough.

The best trick to making a flaky vegan pie crust is to minimize the amount of moisture used, while still having enough stickiness to roll it. Using minimal liquids helps create the flakiest pie crust possible. That’s why my favorite trick involves alcohol.

Vodka adds moisture to the pie dough, allowing it to be malleable enough to work with. Of course, most of it bakes off in the oven, leaving a nice, flaky crust.

There are lots of different vegan pie crusts. Let’s discuss some of the options you have for your next vegan pie. For example:

So, you see, there are lots of vegan pie crust recipes, including some healthier versions too.

That’s our post for Vegan Pie Crust. Use the recipe below to make your own and stay tuned because there are some pretty fabulous pie recipes coming your way this week. 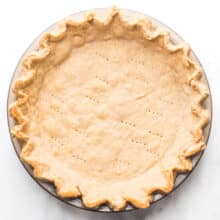 This post was originally published in 2015 and was updated to include new photos, new text, and an updated recipe in 2020.