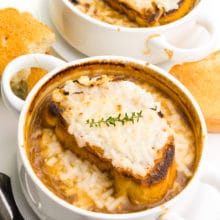 This Vegan French Onion Soup recipe may be the best comfort food available. From the rich, caramelized onions, to the crusty bread on top with melted vegan cheese, every bite is better than the last.

Soups are the best dishes because they can be an appetizer, a side dish (for salads or sandwiches), or even the main meal. This veggie French onion soup takes it to another level because it’s all those things and absolutely delicious, too!

When it comes to comfort food, I find soup, vegan loaded potatoes, vegan nachos, and even this vegan beef stroganoff to be my favorites.

Store soup in an airtight container in the fridge. It will keep up to 5 days. It can be frozen by transferring it to freezer-safe containers where it will keep up to 3 months. To serve, remove soup and let it come to room temperature. Cook until heated through. Then add toasted bread and vegan cheese on top and broil, until the cheese turns golden brown.

Traditional French onion soup is made with beef broth and topped with mozzarella cheese, so it’s not a vegan soup. However, it’s easy to transform this soup into a vegan delight by using vegetable broth and vegan mozzarella.

What can I use instead of wine in French onion soup?

There may be plenty of reasons you prefer not to cook with wine, however, don’t be left behind on the amazing flavor it adds to this soup. Create a decent substitute by combining 4 tablespoons of whine vinegar with a cup of vegetable broth.

Serve vegan French soup with any of the following: 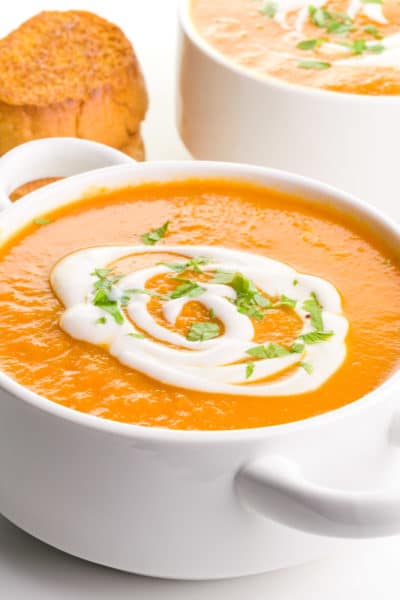 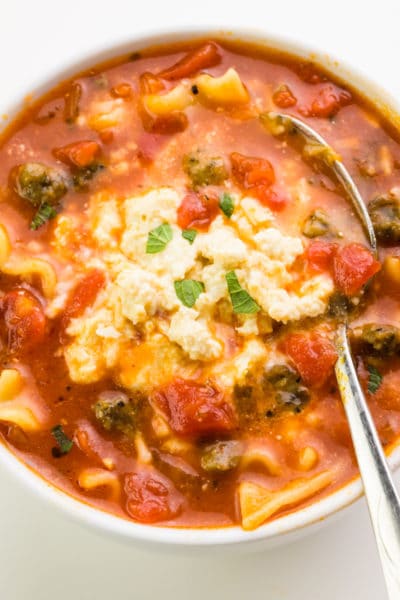 That’s it for this vegan soup. Enjoy! 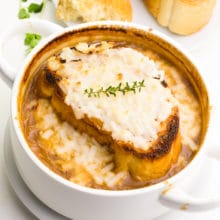 How to cut onions in thin slices: