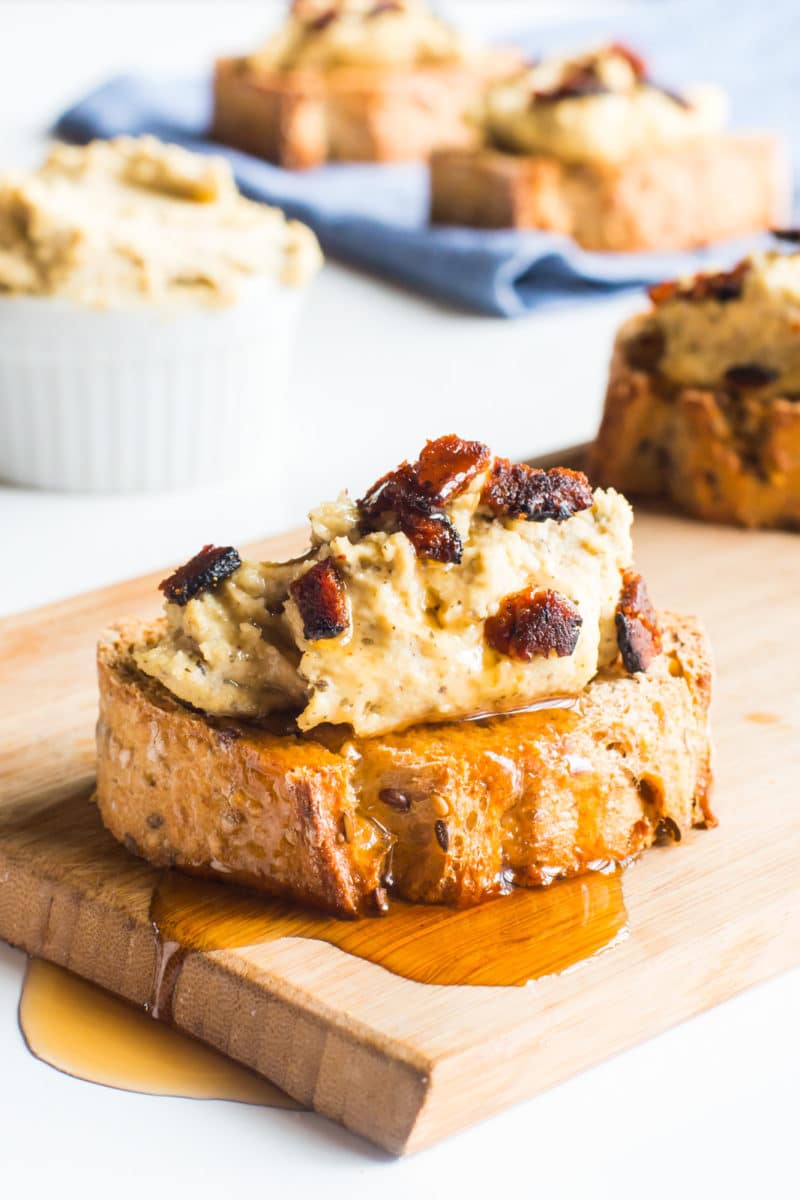 In search of the perfect appetizer, I came up with this little dandy, the Vegan Bacon Ricotta Crostini. If you like the flavor and texture combinations of crusty toasted bread, creamy cashew ricotta, vegan crispy bacon drizzled in maple syrup, you’re in luck! I happen to have a thing for vegan appetizers.

Check out my Vegan Rangoon Dip. It tastes just like the stuff you buy at Chinese restaurants, but without dairy or crab meat. Oh, and while you’re at it, here’s my Vegan Queso Dip. So easy. So good!

We went to a couple of holiday parties recently and I realized that having a good appetizer recipe handy is imperative. Because if you’re the lone vegan at your party, well, don’t expect much to eat. There usually will be a veggie tray. And if you bring some Vegan Ranch Dip with you, you’ll be just fine! And usually, someone will bring some hummus. That’s always a great score for vegans!

But sometimes, or maybe all the time, I like to show off a little. Like, oh, you think only the omnivores get all the fancy foods?

There’s a competitive streak in me, for sure.

So that’s why I came up with this Vegan Bacon Ricotta Crostini.

We are in the new year and Shawn and I are in “let’s get healthy” mode. So, I’m begrudgingly packing up the overly sweet desserts in favor of healthier recipes.

However, even though there was a frigid wind outside, we were riding our bikes through the tropical streets of Costa Rica (via video, obviously). I’ll take what I can get at this point.

I know you can look at a recipe like this one and think it looks kinda complicated. It’s not. It’s a very simple cashew ricotta cheese, topped with Sweet Earth Vegan Bacon and drizzled with maple syrup.

I have to confess, the combination of maple syrup and that toasted, crusty bread? It’s pretty fabulous.

If that’s not enough to love, then just take a moment to think about that Sweet Earth Vegan Bacon. Not only is it a healthier alternative to meat-based bacon, it’s also convenient and flavorful! It works perfectly with your (and our) New Year’s resolutions!

Each piece comes smothered in a smoked hickory sage sauce. How perfect does that sound?

Also, one of my new year’s resolutions is to take my commitment to environmentalism to the next level. Eating plant-based is one of the best things you can do to reduce your carbon footprint.

I figure we can lead by example. Right? Be the change we want to see. All of it!

And if you can be the change while eating Vegan Bacon Ricotta Crostini drizzled with maple syrup? Well, that’s not too shabby!

Change This Recipe To Achieve Your Goals

Confession time. Following a recipe word-for-word gives me anxiety. I don’t know why, but it does. I just like making things my own way. Or maybe I’m just a control enthusiast. (I substituted “enthusiast” for “freak” because of, well, you know, creative license).

So here’s the deal. This Vegan Bacon Ricotta Crostini is fabulous. I even bought whole wheat crusty bread which adds even more nutty delicious flavor to the whole bite profile. But the thing is, cooking at home becomes even MORE enticing when you follow your own passions. And the more you cook at home, the healthier you will be. I’m not just making that up. There are studies that show eating at home makes people healthier. In fact, this study from Johns Hopkins shows that cooking at home is THE healthiest thing you can do to achieve your goals.

You can serve this Vegan Bacon Ricotta Crostini on a platter with the maple syrup just waiting to be drizzled. Or, you can go ahead and drizzle it yourself. The good news about doing it that way is the toasty bread soaks up some of the maple flavor. It’s simply divine! 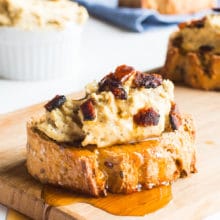 For the Cashew Ricotta:

For the Vegan Crostini:

You can do a long or quick soak to get the cashews tender.