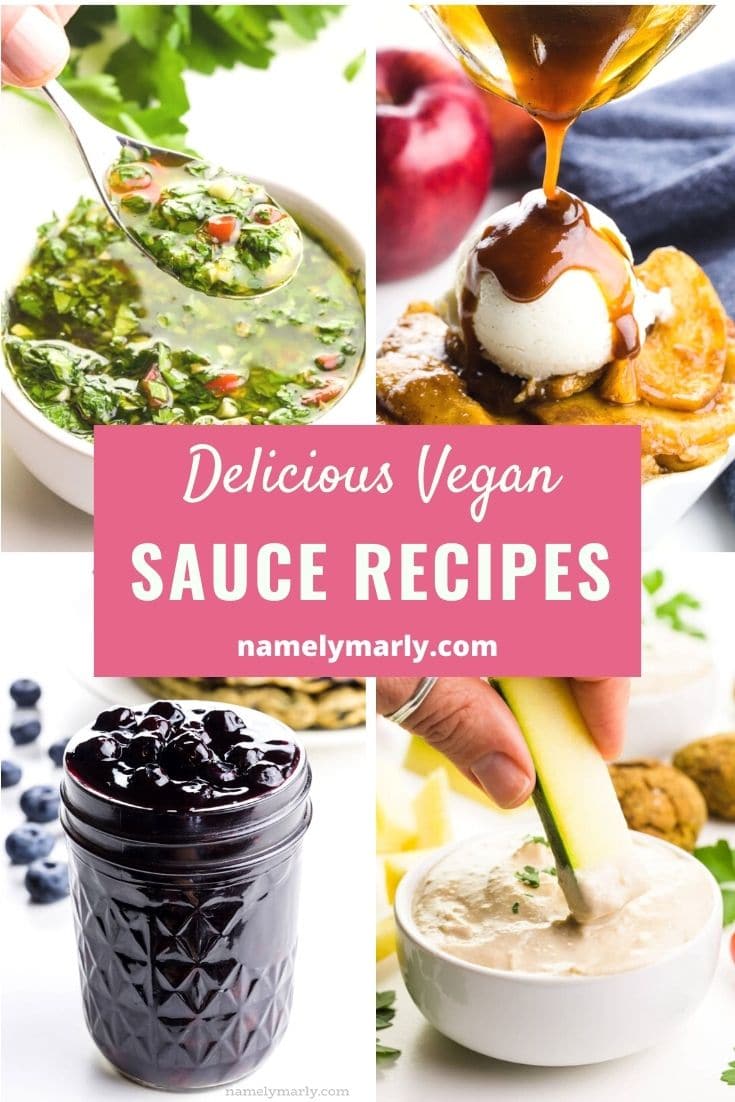 Having plenty of vegan sauces on-hand can be the key to transforming your plant-based recipes from good to great! These vegan sauce recipes range from cheese sauces to seasoning sauces to help you create the best and tastiest dishes in your kitchen!

What is a Sauce?

Loosely defined, a sauce is typically used to add flavor or texture to other dishes. It can be liquid, creamy, or even in a semi-solid form.

These sauces are all vegan and can be used to enhance your plant-based meals. I love having several sauces available to add flavor to my favorite recipes.

Let’s begin this sauce journey with condiments. Having the right vegan condiments available can make any meal better, especially if you’re serving vegan black bean burgers. A dollop of BBQ sauce or even hummus on a veggie burger makes all the difference.

Of course, a sandwich sauce may also be considered a condiment, but I felt these deserved their own category. Why? Because spreading cashew cheese sauce over a sandwich adds more than just flavor and texture, it adds happiness, too. At least that’s what it does for me! And that vegan big mac sauce is a game changer when it comes to making your vegan sandwiches shine!

Some sauces are not served on their own so much, but they are a great ingredient in other dishes. Or they are perfect as marinades. Vegan Worcestershire sauce and chimichurri are two great examples!

Many sauces are savory in nature, but these dessert sauces are meant to be served after the meal. Add some strawberry puree over vegan chocolate ice cream. You can also serve it with fresh fruit, coconut whipped cream, and a slice of vegan pound cake. What a lovely combination!

These sauces can also be served for breakfast over your favorite vegan zucchini pancakes or whole wheat waffles.

And I love drizzling vegan ranch dressing over vegan cottage cheese. The flavors together are the best! Whichever one you choose, I hope you love these vegan sauce recipes!

I realize the stuff you spread over bread may not technically be a “sauce”. But if you’re willing to go there with me, a sauce can be a semi-solid food, making these bread spreads the best sauce to serve on your favorite bread, like cinnamon bread, vegan bran muffins, whole wheat banana bread, and more.

I have even been known to dip my vegan pizza crust in a little bit of vegan honey butter. So good!

What sauces can a vegan eat?

There are a number of sauces that are vegan naturally, such as tahini sauce. However, you can make many of your favorite sauces vegan by using vegan cheese, dairy-free butter, olive oil, and more.

Tomato sauce, including ketchup, is made with tomatoes and other ingredients like vinegar, and salt. Some marinara sauces will have added dairy and even meat, so be sure to read labels when buying any form of tomato sauce.

You can comfortably add teriyaki sauce to your vegan stir-fries, because most teriyaki sauces are naturally vegan. But as with any product, unless it says “vegan” on the label, I recommend reading the label as some may add ingredients like fish sauce that are not vegan-friendly.

Whether it’s breakfast, lunch, dinner, or anything in between, you can magically make your plant-based recipes better with the right vegan sauces. 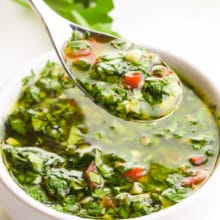 Transform your plant-based diet with the best vegan sauce recipes! A good sauce can make the difference between a good finished dish and a great one! In addition to these amazing vegan sauces, enjoy this healthy herb-infused Chimichurris Sauce to use as a marinade for tofu or as a condiment with veggie burgers or grilled tofu kabobs.
5 from 1 vote
Print Pin Rate Save Saved!
Course: Sauce
Cuisine: Italian
Prep Time: 5 minutes
Cook Time: 5 minutes
Total Time: 10 minutes
Servings: 8
Calories: 133kcal
Author: Marly McMillen