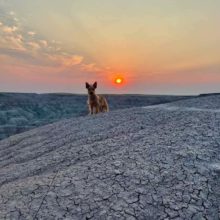 Happy Friday! There’s a lot going on this time of year so I figured no time like the present to share with you some of my favorite things of the present moment.

We traveled to the ND Badlands again this year (and the SD Badlands, too). You can see from this image the red hue over the setting sun. There were wildfires in Montana (or maybe it was Wyoming?) that made photography a bust for Shawn.

I was so happy Adee joined us for this trip. We all enjoyed seeing bighorn sheep, bison, wild horses, and even a few Prairie Dogs. Ok. More than a few!

It was our first trip with our puppy, Otis. He wasn’t happy at the beginning of the car ride but it was a great way of exposing him to road trips and he is doing much better in the car these days. Nothing like a little exposure therapy!

We’ve been so busy on remodeling our bedroom these last couple of months. When you’re updating everything from flooring, popcorn ceilings, to the closet, it takes time.

Actually, this project started earlier in the spring when Shawn replaced the shower and toilet in our bathroom. When you’re dealing with a 37-year old house where some rooms probably haven’t seen updates the entire time, things just have to be replaced and updated.

But we slept in our bedroom for the first time last night and it was wonderful to be back! We’re doing the finishing touches on the closet and should be entirely moved back into that room soon.

What I’m Learning From Tennis

In between painting walls, baseboards, and ceilings, we also watched a lot of tennis. The U.S Open had some very exciting matches and we enjoyed watching them!

We also play tennis and I feel like I’ve learned so much from the game. For example, it’s important to manage your expectations. It’s so easy to want to play like the pros! The reality is they’ve been at this for a long time (some start when they’re only toddlers), and have great coaches watching their every move.

Finding a balance between having fun and growing in skills is super important in whatever you’re doing, whether it’s tennis, cooking, or any new skill!

I’ve been reading some amazing books lately. If you’re into reading as well, you how tricky it can be to find the right books. I’ll share with you what I’m reading and how I feel about it. Who knows, maybe you’ll find something you’ll like to read, too.

First things first. My favorite reading “tool” is an app called Libby. It’s connected to public libraries around the world and as a result, you can find e-books and audiobooks to check out from your library card. My favorite medium is audiobooks so I’m loving this resource. However, you can also check out e-books and read them on the app or via Kindle devices.

The Happy Ever After Playlist by Abby Jimenez, The Scent Keeper by Erica Bauermeister, Conversations with Friends by Sally Rooney, and Intimacies by Katie Kitamura.

I also have my own book coming out soon, The Girl Who Ate the World. Sign up to get more information, including how to pre-order. I’m very excited about it!

In addition to house projects and the US Open, we didn’t have a lot of time for TV this month, but we definitely watched a few shows. Here are my favorites:

On our list to watch soon will be See via Apple+ and continuing on with other shows we’ve started.

What I’m Listening To

Podcasts and Music. That’s what we’re talking about here. Here are some favorite albums, shows, and/or episodes that I’ve listened to recently:

In addition to the bedroom updates, we also had a few other projects and organization hacks going on in the house.

Getting organized is the name of the game which also means reducing clutter. Now that the bedroom project is “mostly” done, I’ll be focusing my attention on some “fall cleaning” and this has me excited and inspired!

There’s no end to the food I’m passionate about, but here are some recent favorites I want to share with you:

Shirlin recently left this review of our Vegan Ermine Frosting.

★★★★★
This is one of my favorite recipes. And since going vegan I had a hard time finding a recipe that had the right amounts to get that same consistency. And this is it!!! It’s just like vegan whipped cream.

On Namely Marly this Week

Vegan Thousand Island Dressing. This creamy dressing is perfect on salads but it’s even better on veggie burgers. It’s so great to keep this versatile sauce around, especially since it takes only minutes to make!

Vegan Soup Recipes. Soup is coming! Get ready with these tasty vegan soup recipes all in one place. This post includes everything from vegan potato soup (my favorite), vegan lasagna soup (like lasagna in a bowl), vegan broccoli soup, and more!

Almond Milk Smoothie. We love our smoothies here, including our tried and true Green Smoothie which we have every day. Yes, every single day. But it’s not like that. We actually love it! And now we add this creamy, chocolate, almond-infused smoothie to the list of our favorites as well.

Five Most Popular Posts This Week

Saturday — Hello weekend! I love making this Vegan Macaroni Casserole on the weekends and enjoying the leftovers throughout the week.

Sunday — I’ll be making a Roasted Vegetable Pasta, a new recipe I’m testing for the site. Once it’s perfected, I’ll be sharing it with you. It’s already becoming a quick favorite here! And it’s the weekend so I like to live a little! That means some Vegan Blackberry Donuts. Swoon! Besides, I have a tennis match which means I’ll burn off those calories. 🙂

Monday — Back to the basics means I’ll fix some Vegan Minestrone. There’s just enough chill in the air to make it ok to make soup and it’s nice to have a healthy go-to meal in the fridge, too.

Tuesday — Black Bean Burgers are so easy to make and we can have the leftovers for lunch the next day, which is an added bonus.

Wednesday — While the weather is still nice, I’m going to make some Vegan Kebabs one more time. Besides, my garden cilantro won’t last much longer so it’s time to make some Chimichurri Sauce, which pairs perfectly with tofu kebabs.

Thursday — I think it’s high time for some Vegan Enchiladas. We haven’t had these in awhile and we both love them! I’ll serve some Corn Salsa on the side because, you know, everything is better with corn!

Friday — In this house, Friday night is all about pizza. So, I’ll make my homemade Vegan Pizza Dough in the morning and let it rise throughout the day. Then I’ll make some Vegan Pepperoni to add on top. Or who knows, maybe I’ll get some more Beyond Sausage. I usually make a gluten-free Cassava Flour Crust for me. There’s no shame in buying pre-made crusts. I just like reducing single-use plastics which is just another reason I prefer homemade. If we stay in and watch a movie, I’ll make some Vegan Popcorn for the fun of it!

So, now it’s your turn! What are YOU having this week?